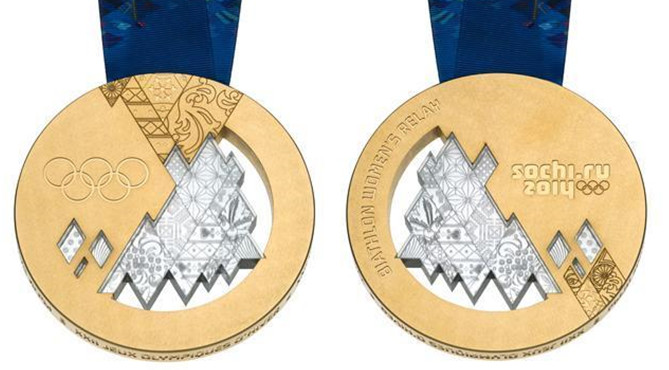 When gold medals are handed out at the 2014 Winter Olympics in Sochi, Russia, in February, athletes will receive silver medals plated with gold. The last time the Olympic Games awarded solid gold medals was more than a century ago at the 1912 Summer Games in Stockholm, Sweden. This year's silver medals, produced by Russian jeweler Adamas, are sterling silver while the bronze is made of an alloy of copper and zinc.

Olympic gold medals were all gold for only eight years, starting in 1904 when they were introduced at the games held in St. Louis.

That's because gold became costly over the decades, especially in recent years. "Gold rallied more than fourfold from 2004 to 2011, when it reached $1,895 an ounce," says Terry Hanlon, president of international precious metals dealer Dillon Gage Metals in Dallas. And though the price has recently declined, the yellow metal remains too pricey to make Olympic gold medals solid. New York gold closed on February 4, 2014 at $1,252.10 an ounce.

Likewise, silver prices surged in 2011 and then retreated. "But at $19.42 an ounce, silver is certainly more affordable for use in medals than gold," Hanlon adds.

This year's Olympic gold medals weigh one pound each while the silver and bronze awards are slightly heavier. The gold medal contains 525 grams of silver and 6 grams of gold. The 2014 silver medal is made of 525 grams of silver. Each award is 0.4 inches thick and 4 inches in diameter. They're the largest and heaviest Olympic medals ever produced. Jewelers used nearly seven pounds of gold to plate the mostly-silver gold medals.

Adamas, one of Russia's top jewelry companies, is the official supplier of medals for the 2014 Olympic and Paralympic Winter Games.

The front of the 2014 medals depicts the Olympic rings while the reverse side has the Sochi 2014 emblem and the competition's name in English. On the medals' edges, the official name of the games is inscribed in Russian, English and French.

The 2014 Olympic and Paralympic medals feature a Patchwork Quilt -- a mosaic of national designs from the cultures and ethnicities of the Russian Federation. A combination of metal and glass imbue the design with light. The medals show the Sochi landscape, with the sun's rays reflecting through snowy mountain tops onto sandy beaches on the Black Sea coast. It took workers about 18 man hours to produce each medal.

Olympic gold winners will be given a medal on Feb. 15 that includes a piece of the meteorite that struck the Russian city of Chelyabinsk a year earlier, injuring 1,600 people.

A record 1,300 medals were made for the 2014 Olympics, thanks to 12 new events this year -- women's ski jumping, a figure skating team event, a luge relay, a biathlon mixed relay, a snowboard and ski slope-style event, a ski half-pipe and a snowboard parallel special slalom.

Sochi was selected as the host city in July 2007. The 2014 games are the Russian Federation's first Olympics since the breakup of the USSR in 1991, and they're slated to be the most expensive ever. In total, 98 events in 15 winter sport disciplines will be held. More than 30 years ago, the USSR was the host for the 1980 Summer Olympics in Moscow.

Hanlon is looking forward to watching American athletes ski, play hockey and figure skate. "The competition will be fierce, and we'll be cheering our athletes on to bring home the gold!" he says.