For the last five years, hedge fund performance has been below its historical average, and most institutions in France did not increase their allocation. This seems to be changing in 2013 when with the changed dynamics in the financial markets investors’ expectations have moved from capital preservation to competitive performance, and are more willing to embrace higher volatility.

In the context of a global portfolio with somewhat stretched valuations and shorter overall market cycles, investors have now many good reasons to evaluate the merits of alternative strategies. More new ideas, trading and investment strategies have become available for investors. One reason for that is that a lot of people who were running strategies internally at banks are now leaving to either set up or join hedge funds – two firms represented at the Roundtable are such spin-outs.

People often think that the AIFM directive is only targeted at hedge funds, which is far from true, particularly in France. About two thirds of the 600 French asset management companies will eventually be AIFM authorized, and the majority of funds domiciled in France is not UCITS and will fall under the category of AIF. Against this background, it is worth noting that a number of provisions in AIFMD are directly inspired from the French regulation framework. This is one of the reasons why French asset management companies tend to have it easier to adjust to than some of their European competitors. For example, the rules on depository both in AIFMD and tomorrow in UCITS V are very much inspired by French rules, as these have been widely acknowledged as protective and efficient. There are other examples, such as valuation or the prevention of conflicts of interests.

The Opalesque 2013 France Roundtable, sponsored by Lyxor and Eurex, took place on June 6th 2013 in Paris with: 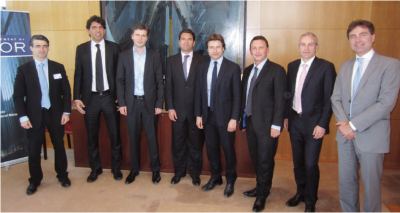 • Why Lyxor has started to promote and back emerging managers

- Deconstruct and Blending: How AIFM offers investors a more efficient way to use hedge funds in global portfolios

Can AIFM be exported beyond the EU?

- How will UCITS VI deal with complexity and derivatives?

• Benefits of funds of Managed Accounts

• Dividend Futures: Launched by Eurex in 2008, will the market evolve so that each listed firm will have dividend futures,

• The renaissance of the fund of funds / multi manager industry

• Paris beats London and Geneva? Why independent asset managers can thrive in France

The Roundtable PDF can also be downloaded here : www.opalesque.com/RT/RoundtableFrance2013.html